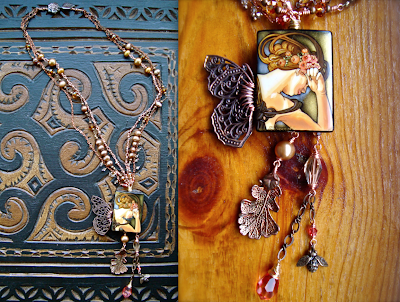 The piece I created resulted from several different things. The biggest thing is that my sister, Cynthia Thornton, just released a book called Enchanted Adornments: Creating Mixed-Media Jewelry with Metal Clay, Wire, Resin & More from Interweave Press. To celebrate the release of the book, we became sponsors of the prize for Art Bead Scene’s November challenge. The prompt for this month is Richard Dadd’s The Fairy Fellers’ Master-Stroke. I just moved and unearthed a box from Artbeads.com during the unpacking process. To pass the time while unpacking, I’ve been listening to Susanna Clarke’s Jonathan Strange & Mr. Norrell on book on tape. As soon as I saw the Russian pendant, I was instantly inspired and the fairy theme came together. It took a couple of tries and some patience, but I finally figured out how to put the piece together seamlessly.

To learn more about the necklace and its inspiration, visit my blog post.